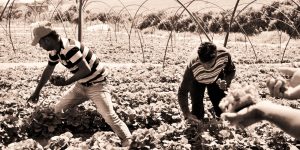 If you are a migrant in Greece you probably know quite well already how difficult life is in this country for those not born here. You know that even if one reaches the borders of Europe – and escapes the poverty and war stoked in Asia and Africa by small and large bosses – one must risk his or her own life. You also know already that those who do eventually find themselves in Europe are not treated by the state and its governments as people in need, but rather are stacked into camps and prisons, without food, medicine, heating, education, and the freedom to go where they want.

But even those who manage to avoid or leave the camps and prisons are living in a state of fear. They worry constantly about their papers, and do not know when the police might stop them on the street to search them – and possibly beat, arrest, and deport them. When they manage to find work they perform the most difficult jobs without insurance and for far less money than other people. They are often confronted with the murderous sentiments of fascists and racists. Their children are not treated as equal to other children in school. They have no security and none of the rights that every living being should have.

The policies of the state – of all capitalistic states – as exercised against migrants are part of the more general attack against all those belonging to the oppressed classes. Because even those born here -or who have been in this country for many years – are experiencing an increasingly suffocating reality. They find it difficult to survive in the conditions that bosses and the state are “offering.” They are paid less and less every day for their work, expensive rents drive them away from their neighborhoods, and they are continuously confronted by police whenever they attempt to self-organize in an effort to pursue better living conditions and more freedoms. They feel increasingly that they have no control over their lives.

Recently, the New Democracy government, continuing the work of the previous Syriza government, decided to forcibly close many buildings in the neighborhood of Exarcheia in which mainly migrants lived. Although the buildings were vacant for years and had been serving no one, the state with its cops evicted them, judging that anyone who wanted to organize, fight, and solve his or her housing problem was a threat to “national security” and to the bosses. They transferred the residents to concentration camps and prisons, and expelled their children from schools in the area. In order to prevent people from returning to these homes, they have filled all the streets of the neighborhood with armed policemen trying to intimidate both locals and immigrants still living in the area.

We all face the same obstacles, as workers, unemployed, locals, and migrants from all countries, with or without papers. We want to put an end to the aggressive strategies of the state aimed against us all. We want to organize and act outside of the channels of political parties and vested interests. We want to defend squats and all the places where people meet, find collective solutions to their problems, and fight. We want to put an end to the repression before all the neighborhoods are filled with police and military. Migrants who are locked up in horrible camps such as Moria, Samos, and Amygdaleza are already revolting. In these fights they will find us by their side. The answer to all that is happening must be given by all of us collectively, as only in this way can we halt the fear and take power into our own hands, only in this way can we resist.

AGAINST THE DEVALUATION OF OUR LIVES

COMMON STRUGGLES WITHOUT NATIONAL DIVISION
AGAINST STATE AND BOSSES