Detention centres, Petrou Ralli, just like every prison, are one of the means used by the state to throw aside those it can’t or won’t assimilate and use, to punish those who disturb, to set an example for those who are still dreaming of living with dignity and freedom.

Migrants there are imprisoned in inhumane conditions with no contact with the outside world. Their full isolation from society gives their jailers the freedom to physically and psychologically abuse them non-stop. They are denied access to food, healthcare, information, human contact and basic dignity. Their very life and existence becomes disposable in the devaluation they are living in.

Imprisoned and free people are separated by a wall, and the side we’re on is just a matter of luck or bad luck, as well as the result of the state’s current plans. Hundreds of prisoners inside Petrou Ralli are hit by the same system of oppression as us who are going to be outside the hellhole on Tuesday night to change the year with them.

We call to a gathering outside Petrou Ralli detention centre on the night of New Year’s Eve, Tuesday 31/12.

We also support the calls for a gathering outside Korydallos prison.

– No person invisible, no person in the hands of the state

– Until the tearing down of every detention centre and prison 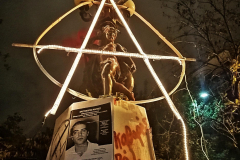 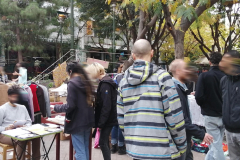 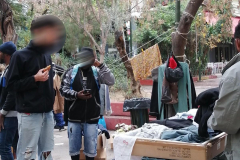 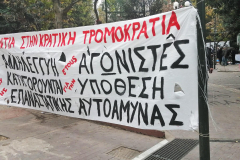 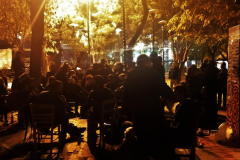 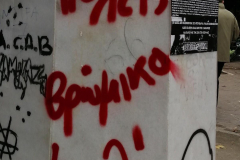 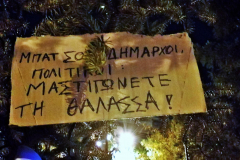 On Sunday, December 22nd, we organised a day-long event at Exarchia square, in answer to the preannounced municipal event–front for oppression that was to take place at noon of the same day.

The municipality of Athens under Bakoyannis plays a central part in selling out our neighbourhoods and answers every attempt of resistance with more and more repression. In Exarchia, it tries to camouflage the repression and gentrification of the neighbourhood that translates into shops, the metro, raises in rent, a sterilised and controlled environment, with superficial events and actions accompanied by the media twisting the story and armed goons. It wants to impose its superiority by cleaning the square, where it removes our posters and our speech from the neighbourhood and as a symbol of its domination it pins down a tree, like in a conquered space. We view this event as one more aggressive act of political and cultural distortion of the ground of Exarchia, one that we had to answer by cancelling it through our active presence throughout the day. We couldn’t allow this fiesta of hypocrisy, where there wouldn’t have been space for us, anyway.

At the dawn of 22/12, 50 comrades reached the square to prepare the ground for an event made by the ones below for the ones below. Suddenly the square came to life with a collective breakfast, coffee, tables with political material and zines, a free shop for clothes and creative activities with children. A moment of tension in the morning was the passing of 5 Delta motorbikes that were checking out the movement in the square before disappearing towards themistokleous—the last insecurity force we saw during the event.

As noon was approaching, when the municipal event was set to take place, people flooded the square supporting the event with their presence. There was a microphonic that filled the square with anticommercial music, a free book shop, and all that next to and in collaboration with the market of the square and the self-organised bazaar of Stray Exarchia. At the same time, Mano Aperta collective was making a collective meal with free contribution for the people present at the event. An open discussion was started about the university, asylum, education, business and gentrification by the Libertarian group of the philosophy department. Meanwhile, artistic activities were continuing with the decoration of the burnt tree. On the tree we hung our messages, which the state wants to erase.

On the way to the afternoon, the screening of the documentary on gentrification and short-term leasing didn’t happen due to the weather and other technical difficulties. But the rebetiko did take place, to close the night in the same climate of comradeship and companionship as the rest of the day. Comrades also made a festive addition to the statue in the centre of the square, placing a large, bright circle A on top of it.

The celebration had a very good atmosphere, with everyone getting closer (and not just the anarchists). Adults and children, locals and migrants, residents and regulars of the square celebrated together trying to not reproduce hierarchies and oppressions. Our presence there left no room for those who oppress: state and capitalists, sexists and fascists. For example, a bookshop owner from the neighbourhood who is known for his gentrification efforts, his flexible understanding of workers’ hours, and his participation in various commercial fiestas in the square wasn’t able to set up his stalls.

From next year, we’ll be here every day!