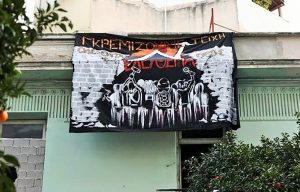 After the events in Koukaki and the cops’ attacks on Sunday in Evelpidon, all of the arrestees were brought back to court today 13/1. Although their trials had been set for 11. 00 am (for the arrestees of 12/1) and 1:00 pm (for the arrestees of 11/1) there was a wait until roughly 7:30 in the evening in an outrageous attempt to exhaust the accused, their lawyers, and the about 150 solidarians who remained tirelessly outside the building until about 9 pm. It goes without saying that the MAT guards never stopped provoking the comrades throughout it all. The charges, despite the prosecutors’ insistence on the contrary, are all small and include disobedience, resisting authority and serious bodily harm. The arrestees finally had their trials postponed for January 22, 23, and 24, and were all released. The solidarians—who had been shouting slogans this entire time—welcomed them with celebration and cries of joy.

In this atmosphere, and parallel to the court cases, we were not surprised by the unprecedented slander of our comrades, the media war that targeted them, and the plain lies about the events that were thrown around by the gutter press of the left and right wing, taken straight from GADA headquarters. The usual recipe was complete on the channels with the stereotypical statements of some “frustrated residents” of Koukaki, the lament of syndicalist cops about the “anarchists’ murderous desires” and their destroyed equipment, and plenty of the famous terror–hysteria sauce—aimed clearly at convincing that the charges need to be “upgraded” to felonies.

However, it’s hard to reverse the atmosphere in favour of the cops, the state and its spies, or to whitewash their humiliation. The image of dozens of OPKE (forming a “turtle” in Roman legion style) trying to evade the righteous “fire” of our comrades (which were cooking pots, books, guitars, flowerpots and anything they had handy) will be hard to erase from the memory of whoever had the pleasure to watch the corresponding videos.

The image of a handful of free people thrashing an entire army of fully armed, machist, hired state murderers can only serve to remind us that all of us together can reach to the skies .

Our dreams are going to be their worst nightmares!

We call tomorrow (Tuesday 14/1) at 19:00 to Gini for updates from our released comrades and discussion of our next actions.