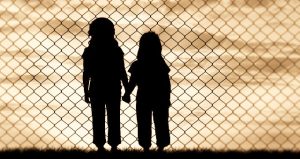 Early on Monday of 23/09/19, the New Democracy government proceeded to evacuate another migrant squat. This last evacuation adds up to a number of previous others, with many migrant squats targeted, launched under the SIRIZA government, with a large number of children among the ‘abducted’ residents.These children, infants, toddlers, elementary and teenagers were until yesterday studying with our children in the local schools, playing in the parks and squares with them and developing relations with the local community. Now they are scattered in various concentration camps in the continent or on the streets, with no access to basic amenities and some of them may even be under the threat of deportation.

At the same time the neighborhood of Exarcheia, for more than a month, reminds us of occupied territories with all kinds of repressive forces lined up around the clock in the streets and squares of the area. Every morning, on the road to work, on the way to school, and even during Saturday’s market, we are confronted with armed squads of riot police (MAT and OPKE). There is an attempt at a local scale to consolidate the police forces as normal while at the same time the people of the neighborhood are excluded from it and are forced to adapt to the new situation. The “normality” of repression accompanies the “normality” of misery as any development is built on our already undervalued lives.

Schools in Exarcheia, after much effort by both teachers and many local parents, have in the recent years sought to provide a perspective for the inclusion of migrant children into the local community. Their violent removal from their neighborhood, school, and social context not only targets these children themselves but also targets the local children who are left behind. When one morning your classmate is no longer next to you on the desk and you learn that she or he has been taken to a concentration camp, you are in fact urged to accept that this classmate as a migrant and squatter was illegal and criminal. You are called upon to accept the fascist practice of racial segregation and racism as normal, at a fragile age in which experiences and situations are the solid base concerning your evolution as a person. The joint struggle of teachers, parents and pupils in Exarcheia neighborhood to include migrant children into local society should set an example that transcends Exarcheia’s boundaries and act as a guide for children around the world as it is them who are about to change the future practically challenging racism and intolerance. It is this prospect of contestation that the state is trying to uproot by all means, with the constant attacks on migrant pupils as well as with the evacuation of squats and all kinds of violent interventions aimed at displacing the inhabitants of a whole neighborhood and replace them with consumers, tourists and individuals from the upper classes.

From our point of view, these attacks are part of the widespread and multidimensional attack that we are experiencing aimed to turn the whole territory into an easily exploitable territory for domestic and foreign capital. The implementation of this conversion requires the discipline of workers, unemployed, pupils, students, migrants, women and LGBTQI+, the imprisonment of those who are in rebellion, and the militarization of public space. We intend to respond by all means to this attack.

We were delighted and pleased to read the announcements of some parents associations in the area, as well as some teachers, who publicly opposed to the abduction of migrant pupils from Exarcheia schools. We believe that when such fascist outbursts appear, everyone, parents, teachers, pupils should take a stand not only in Exarcheia but in all schools and neighborhoods.